The Stories that Matter and the Fuel to your Bar Banter – Canadian Fishing and Hunting News from the Week of September 24th, 2021

Although news has never been so abundant, finding relevant and reliable stories has never been more difficult. Thankfully, Fish’n Canada has you covered. From Killer Goats to Giant Panfish, here is everything you missed this week in the world of Canadian hunting and fishing!

In true underdog fashion, it appears as though a fight between a Goat and a Grizzly Bear ended in a serious upset. Though the event was, unfortunately, not captured on video, a forensic necropsy of a female Grizzly found in a BC park showed lethal puncture wounds in its armpit and neck – ones that could only be caused by a Mountain Goat.

While interactions between Grizzly Bears and Mountain Goats are far from rare, the latter getting the upper hand in these encounters is almost unheard of. In explaining how this strange event must have taken place, Parks Canada wildlife ecologist, David Laskin, stated that ​​“when grizzly bears attack, they tend to focus on the head, the back of the neck and the shoulders of the prey. This attack usually comes from above. The defensive response of a mountain goat would be to protect itself using its sharp horns.”

For more on this rare occurrence, check out the Guardian’s full story at the link below!

After over three years of DNA testing, a new Ontario Pumpkinseed record has finally been confirmed.

Caught in 2018, Chatsworth resident Chris Yates and his 1.37-pound Pumpkinseed are officially in the record books. The Rankin River fish measured 10.8 inches long, had a 12-inch girth, and outweighed the previous record by less than a pound. A win for the Ontario fly fishing community, this new record was caught on a Beadhead Nymph.

For more on this new record, check out Ontario Out Of Door’s full report at the link below.

3 – Illegal pesticide use leads to $2.5 million in fines for CN Rail

The fine stems from an offence that took place way back in 2017, when a spray truck was spotted distributing pesticides along the rail corridor between Prince Rupert and Terrace – right beside one of the world’s most important salmon and steelhead waters, the Skeena River. This unapproved act fell under direct violation of Fisheries Act section 36 and is finally being punished accordingly.

More than just a one-off case, the company was also fined an additional $100,000 this May after pleading guilty to similar charges under the province’s Pest Management Act.

For more on this evolving incident, check out the Northern View’s full article at the link below. 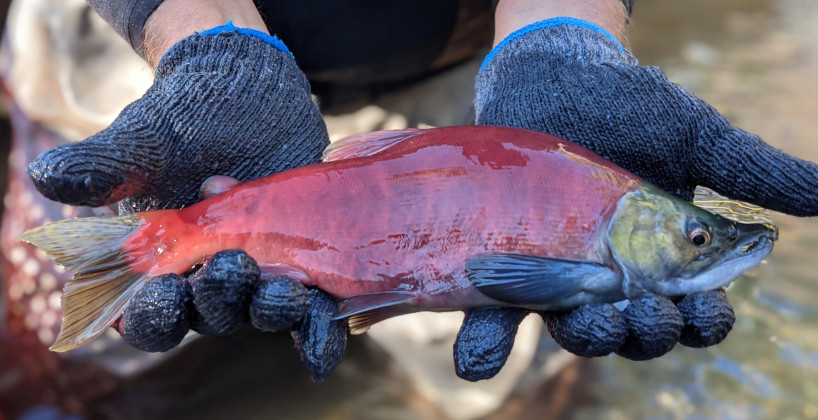 The B.C. Wildlife Federation is warning British Columbia’s provincial government that Kootenay Lake’s iconic Kokannee population could be in serious danger if new management practices are not adopted.

This troubling warning comes right on the heels of the annual spawning season, a time which once had the lake glowing red with millions of spawning fish but now sees their numbers down below 100,000. “I’ve been working on this lake for almost 50 years,” said Harvey Andruask of the B.C Wildlife Federation, “I’ve never seen anything like this.”

So what is causing this decrease in Kokannee numbers? Andruask points to the explosion in predator populations.

Though they may be sought after by anglers, Rainbow Trout and Bull Trout are likely to blame for the declining Kokanne as their numbers have begun significantly outpacing that of the small, bite-sized salmon. “Essentially, the predators … have eaten out all the kokanee.”

Despite Andruask and the B.C Wildlife Federation pleading the government to take action, the province appears to be holding firm and continues to defend its current management strategy which has primarily focused on incentivizing Lake Trout harvest.

Let us know what you think should be done in the comments below! For more information, check out the CBC’s full article at the link below.

Dogs have likely been used as hunting companions for about as long as they have been domesticated. But could these animals be even more useful in the field than we currently give them credit for?

A study published this week in Nature suggests that this is very likely the case, as a team of researchers proves that dogs use specific and recognizable barks depending on the type of species they are encountering. This subject has long been talked about by experienced hunters but this study appears to be the first time it has been tested – and proven.

The researchers achieved this by recording and comparing the barks of hunting dogs when they encountered species such as Red Fox, Wild Boar, Rabbit, and Fowl. The results showed that barks were much more defined for larger-bodied, dangerous animals and much less defined for smaller game and birds.

While this may be useful in the field and can surely validate hunters that have long been touting this capability, the study also seemed to suggest that this difference in barking is likely the result of the comfort the animal feels, not a conscious effort to alert their owners. This was on full display when the dogs were confronted by Red Foxes, as the smaller-bodied predators inspired barks similar to their fowl encounters despite the higher danger posed by the fox.

Let us know what you think of these new findings in the comments below!

For the full study, check out the link below.